Where all the workshop knowledge lives together.
Post Reply
194 posts

This subject has loads of coverage, and there is lots of good technical data on the various forum, so before I decided what I was going to use I had to do my research.............I am an engineer, its what I do!

So having searched all the Firestorm / Superhawk sites, I lifted all the piston size data [caliper & Master cyl] and ran them through an XL sheet to get a better view of the hydraulic ratios.

If I assume all other factors are equal [ie the mechanical leverage ratio of the brake lever to the master cylinder, the disc diameter and the pad friction], then the best braking power will come from a combination of Caliper area, and leverage ratio. For good leverage ratio you actually want a very small MC diameter, but then you would end up with a long lever stroke in order to displace enough fluid to move all the caliper pistons the required amount.
A bigger MC will give less hydraulic leverage, but will give less lever travel, so will have a stiffer lever feel.

What is surprising is that the standard Storm has a good leverage ratio, but very small caliper pistons...hence why the other systems give better braking.

I will be using the CBR600F calipers and MC, as they look good on this compare, they allow better pads from the blade or the SP1/2 to be used, and they are cheaper on e-bay!!

Will have to wait till spring before I can tell you what the improvement is, but I thought I would share this in case others are looking at a brake upgrade as part of the winter overhaul.

I've been using an SP-1 master cylinder with the matching calipers for about a year now, and can vouch that it's a really googd upgrade- well worth the time it takes to trim the calipers a bit, and even better with titax levers.
Chris.
Unus Dies Gingiber Mos Hereditas Orbis terrarum.
Top

Firstly, brill information, especiallyfor people like me, who aren't engineers.

I'm running an SP1 M/C mated to Goodridge lines and Tokico calipers off a GSXR600 and although they were initially better than my standard Storm calipers, they've faded a bit. I think that's probably due to glazed pads from a Cadwell TrackDay and time for new piston seals. Only problem is that the seal set is Â£40 a caliper and for that money I'm probably better off getting another pair of calipers.

What would you suggest mated to an SP1 MC, same again or CBR's, from your info I think the CBR's would be a better bet ?

Mark,
Looks from my data like the CBR600F calipers are the same sizes as the SP1 was, so if Honda thought they worked well with your master cyl, then they should be good.

using a matched pair from a bike with a good reptutation for brakes is always a safe bet.

It may still be worth you getting teh pistons out of your Tokico calipers and giving them a good clean, even if you use the old seals, this can be a big help. Also you could try and de-glaze the pads or treat them to new pads.
AMcQ
Top

I agree with not binning your seals straight away, quite often the pistons are the guilty party! Are the pistons in your calipers steel?
I ask because in the sp1/2 cbr600rr calipers, the pistons are coated aluminium and are easily cleaned with just a wipe from a damp cloth- marvellous.
I've got some spares for these calipers, seals and pistons so if you need anything just let me know.
Chris.
Unus Dies Gingiber Mos Hereditas Orbis terrarum.
Top

To be honest, I'm not 100% sure, but they do clean up well and I am pretty good on this and keeping pads clean. I think the problem may have started when one of fork seals leaked fork oil onto the disc surface, but I cleaned the pistons, disc surface and changed pads just prior to a Cadwell trackday and although it initially helped, I'm not 100% happy with the SP1, GXR600K1 combination, though it is better than standard.

One problem I do have is popping out the pistons from the calipers, I guess you guys use an airline to do this, whilst I have to keep filling and re-bleeding the caliper and do each one indivdually, it's a ball ache, unless of course there's an easier way ?.
Top

I've got the caliper piston removal kit with the 14 different size removing rings, so don't have any trouble- my advice is to remove calipers from the bike, split them and completely gut them out. I think it's the only way you can be totally happy with them, knowing they're 100% clean.
Or you can send them to me and I'll do them for you?
Chris.
Unus Dies Gingiber Mos Hereditas Orbis terrarum.
Top

Mark,
I forgot to add that I like the Avatar picture.........looks like that was your Cadwell track day.

The wheel is not on the ground..
AMcQ
Top

Thanks for the info.

I now have a set of CBR F4 calipers on the way from the States, hope they fit.
I should imagine they'll need an overhaul, but I figured there's less corrosion out there because of the climate and with the exchange rate, they were a snip, even with delivery costs.

And you're right, the avatar was from one of my track day sorties at Cadwell, my favourite circuit, especially the bit from the bottom of the mountain to barn.

MarkHunt wrote:I now have a set of CBR F4 calipers on the way from the States, hope they fit................and with the exchange rate, they were a snip, even with delivery costs.
Marky Mark

If you dont mind me asking, what did you pay? i just forked out Â£80 for a pair of a 4000mile UK bike........I didn't think about USA, but as I go to Detroit a lot, I could have them delivered to a collegues house to collect next time I go.

Oh, you will need to machine a little bit off the caliper body to clear the boss on the Firestorm fork leg.....see pic from USA Forum It works out at Â£60 all in, which I thought wasn't bad, though it depends if they are in as good a nick as the pic shows, when they arrive.

Didn't get the link regarding machining caliper body, would you mind yazzing it on again please.

] you can see the machining as the silver area infront of the lower mounting boss.
AMcQ
Top

Thanks chap, but the image didn't show until I'd registered on the Superhawks forum, now I can see the pic and the machining.

I have sp1 calipers and braided hoses. But still original m/c. Opting for a radial from a gsxr1000 k5 upwards if i can find one cheap enough!

Intersting article in the Feb PB mag on caliper and MC upgrades on their project GSXR1000K1 which as standard is fitted with 6 piston calipers and 15.6mm MC.

What the data logging shows is that the hydraulic leverage ratio in set up c) was most powerful, and the big bore MC made the leverage ratio worse so had reduced stopping power.

But the test rider feed back was the opposite:
with set up c) tester said "initially these felt like we had gone back to set up a) then I realised I had much better feel; they seemed smoother and more controlled. There was more lever travel but the brakes felt more progressive after the travel was taken up. All in all I didnt think "wow these are great", it felt like I had less brakes"
With set up d) tester said "it feels like there was a lot more braking power with less effort"

Surprise was that the performace was the opposite!!! the big bore MC gave a much firmer lever, so it felt good, but stopped worse as it generated less pressure in the calipers .... 12% worse stopping distance. the set up d) bike was still doing 30mph when the set up c) bike was stopped.....

Shows that the laws of hydraulic ratios is correct, but what the hand feels can be misleading to the brain.

So I have updated the XL sheet to show the GSXR ratios as well so you can compare the relative ratios in the data above to the various firestorm options. 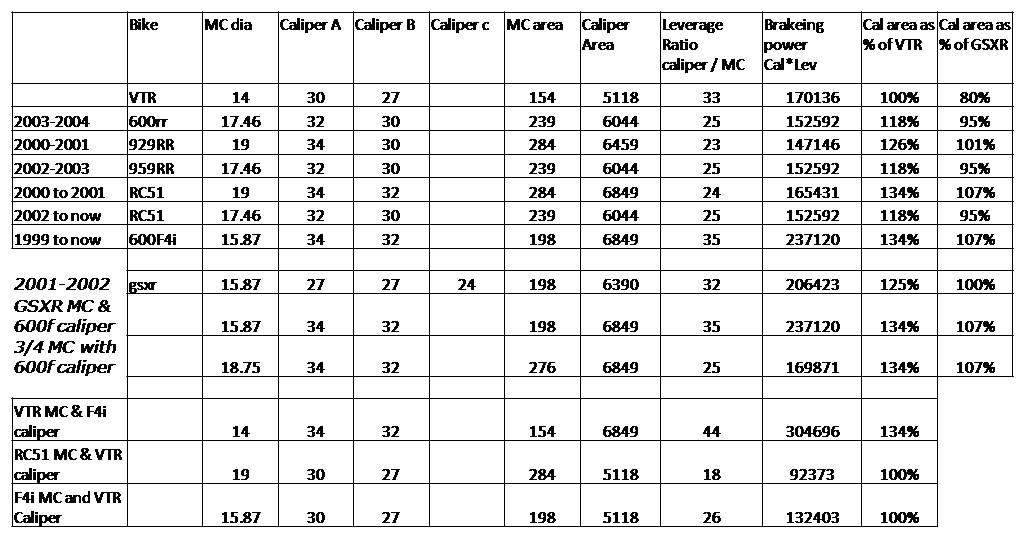 I used the F4i calipers on the GSXR example as they gave 7% more piston are than the data I had for the GSXR 6 pots, and you can see that set up c) improved hydraulic ratio by about 7% over stock, and then adding big bore MC reduced it by close to 30%.

Below the GSXR stuff are just a look see at what you get with various options including the stock VTR parts.
first option looks to have great leverage, but I think the lever would come back to the bar before the biting point!
2nd option would be like the GSXR example set up d) very solid lever feel, but crap braking performance!
3rd option would be similar to 2nd option, but not as crap.

So lots of conflicting data, do you want brakes that feel powerful or ones that stop well?
suggest that you need to take care moving to a lower hydraulic ratio...........a big MC by its self may not be as good as it feels.
But new pads are a clear benefit
Last edited by AMCQ46 on Tue Mar 03, 2020 1:43 pm, edited 1 time in total.
AMcQ
Top
Post Reply
194 posts

Return to “The Workshop Knowledgebase”